Fighting a raging fire is one of the toughest battles in the public-safety world, and with no eyes in the sky to look down upon a scene following a fire, it can make determining the cause and origin of the blaze more difficult.

What Drones Can Do

These unmanned aerial vehicles (UAV) are able to fly over the scene of a fire to help investigators determine the cause and origin of a blaze. They can also be used during an active fire to aid local fire departments with fire suppression efforts by getting a bird-eye view of a blaze in real-time and knowing better where to channel resources. 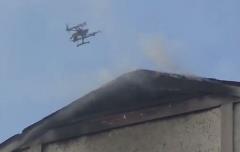 One of the important things on any fire scene is information, says Michael Martin, Fire Marshal with the Topeka Fire Department. That’s one thing that the drones can give us that sometimes we’re not able to have. It gives us that bird’s eye view, the opportunity to see where the hot spots are, and the opportunity to see how the fire burned or is progressing, either in investigations or active fire.

To help determine the cause and origin of a fire, investigators are able to use UAV to look down upon a fire scene to identify burn patterns that would otherwise be difficult to spot from ground-level.

We use the drones to look down onto the building, and we’re looking at the burn patterns from the top of the building, says Wally Roberts, Chief of Investigations. The images show us many things which help determine cause and origin of a fire, so the drones are just another tool in our toolbox.

Another important potential use of drones would be in the case of a wildfire or hazardous chemical spill. Rather than sending humans into a dangerous situation, drones can be flown ahead to get an overview of the situation enabling responders to react more intelligently without putting people at unnecessary risk.

The Office of the State Fire Marshal now has three UAVs in its arsenal – one based in the home office in Topeka, one covering Eastern Kansas, and one covering Western Kansas. These drones are available to other public agencies in need of them, and trained personnel with the Office of the State Fire Marshal Investigation Division will respond to the scene and operate the drones.