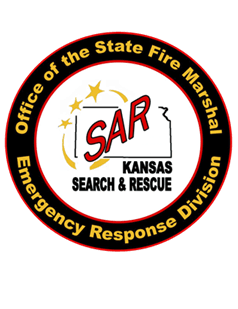 With the signing of House Bill 2097 and upon publication of the bill in the Kansas Register on May 21, 2015, the Office of the State Fire Marshal (OSFM) officially became the coordinating agency with responsibility for the Kansas Search and Rescue response program.

Beyond coordinating the response efforts of participating agencies across the state, the OSFM also helps provide and coordinate training for responders that are part of the program. In addition, the OSFM continues to host and support an annual Rescue Conference at Crisis City, outside of Salina, Kansas that was started in 2008.

By assuming responsibility for coordinating the search and rescue efforts in Kansas, the OSFM aims to achieve the mission set forth by the Kansas Search and Rescue Working Group (KSARWG); “To improve the overall search and rescue capability and response in the State of Kansas and beyond, thereby ensuring that responders at all levels are prepared to provide a coordinated response to any natural or man-made disaster”.

In April 2007, a group of individuals passionate about search and rescue in Kansas met in Topeka to discuss the need for coordinating the state’s search and rescue response, and that group subsequently formed the Kansas Search and Rescue Working Group (KSARWG). The need for a more formalized response system was further recognized after a devastating tornado struck Greensburg, Kansas on May 4th, 2007.

The KSARWG consisted of one member from each of the seven Homeland Security Regions in Kansas. These members had responsibility for coordinating the search and rescue efforts at the regional level. Additional members included a representative from:

Each of the seven regions established a list of participating agencies and worked with their Homeland Security Regional Councils to secure grant funding for equipment and training. The teams continued to work under the guidance of the KSARWG but without a parent agency to oversee the program.

Subsequently, the KSARWG reached out to the OSFM to see if the agency would be interested in becoming the parent agency for the program. The OSFM seemed like a natural fit for the Kansas Search and Rescue program since the agency was already operating a statewide hazardous materials response program, consisting of regional response teams.

Since reaching out to the Fire Marshal, the two groups worked together to make the partnership a reality and with the passage of House Bill 2097, the KSARWG membership officially became an Advisory Group to the Office of the State Fire Marshal.